Our shop is  on vacation.  We’ll be back in the new year! 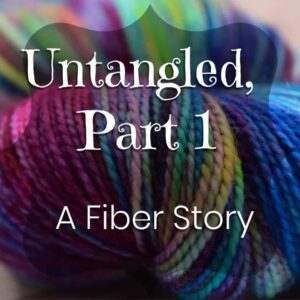 She opened the shutters to let in the daylight and sighed heavily. Another day, another mysterious delivery. Her milk and bread for breakfast were sitting on top of the large paper-wrapped bale. At least this prison kept her fed, and gave her something to do each day.

She gazed out the tiny barred window while nibbling on the fresh bread. There were clouds on the horizon today and the breeze was cold. She could see the tiny spec of the shepherd boy, maybe a mile away, building a fire on the edge of the wood. The sheep were clustered close together. She made up stories about his adventures. She wondered if he knew she was imprisoned up here, wherever it was. There was a driver with a cartload of wool slowly making his way toward her. There weren’t any other people in view, it was cold out today.

The first time she had a package delivery, she thought the mess of tangled yarns was for her personal use. She had received a variety of books and handicraft tools over the last few years, they clearly knew she was valuable and some education and skill worth fostering. Her fire was always sufficient, and her meals regular, if simple. The cat had arrived by accident, but they let her keep it.

The yarns were always gorgeous. Soft finely spun fibers, differing weights and a whole rainbow of colors. Some yarns were single colors, tangled with complimentary colors. But her favorites were the ones that a single skein changed from one color to the next to the next. She envisioned socks in bright stripes, warm jumper with billowing sleeves for the coldest wither nights in the dark mottled hues, an elf costume for the cat. Although she never tried dressing the cat, she was pretty sure that the cat would not return from his nightly prowl if she did.

The first time the yarn disappeared, she wasn’t sure why. It was several days before another bale arrived. After the second bale, they left her a single skein for herself. She made a pair of socks. From then on it was a daily delivery. Once, she had felt rebellious and decided not to untangle the yarn. They had given her one day grace, then her fire went out and no food was delivered. This was a job she had to do if she wanted to stay warm and eat.

She carefully picked through todays bale, separating the yarns out and balling up each one. It was easily enough for a cozy jumper, two if you made them for children. She spent all day picking, untying knots, and wrapping carefully. She tried to figure out how so much yarn had come to be tangled into this horrid mess bigger than her cat. The cat made no indication that he knew either. At the end of the day she stacked the balls on the tiny cart with the empty dinner dishes by the heavy barred door, knowing they would be gone and replaced with another knotted messy bale in the morning.

She opened the shutters to let in the daylight, and sighed heavily. When she turned around expecting another paper wrapped bale of tangled yarn, there was instead the food cart with breakfast, a set of beautiful, tiny, wooden needles and one skein of yarn. As she moved toward it, the sunlight touched the ball and the unmistakable shine of gold froze her in her tracks.

How to Tink and How to Frog

Today I’m sharing the first step on how to fix mistakes in your knitting. I’ll show you have to tink and how to frog your

Hello and welcome! You’re listening to the Fairy Tale Knits show episode 27. First I want to tell you all about some changes. My shop

Adding a Missed Yo

It’s so frustrating when you’re working a pattern and you realize you’ve missed a yo. It can really slow down your progress to have to